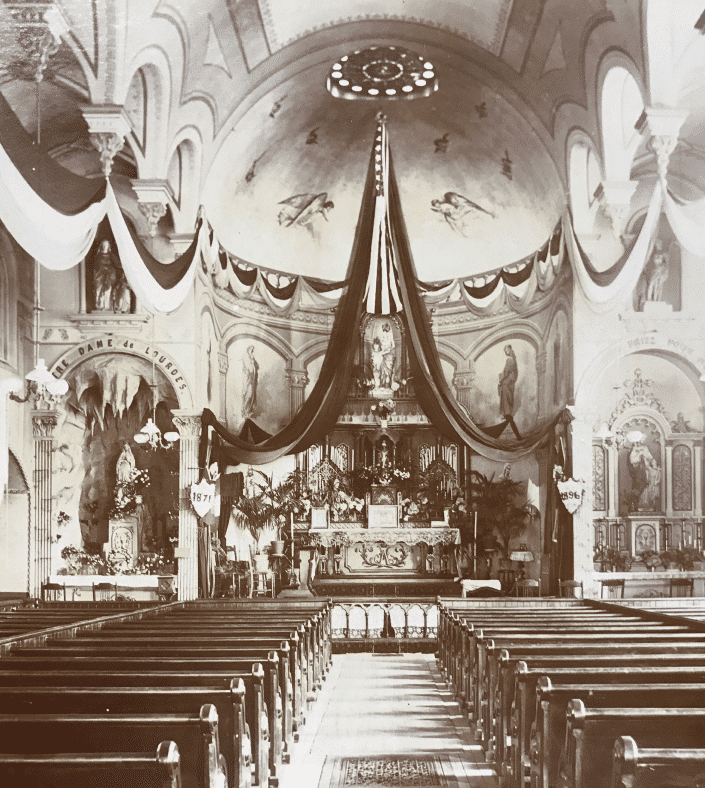 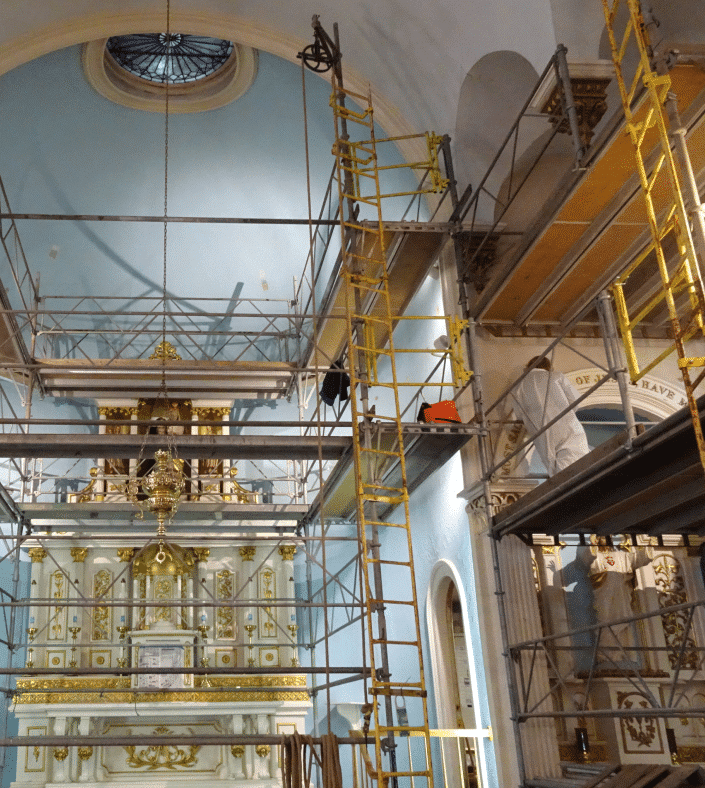 Our Lady of Victory, originally built for the local French-speaking Catholic community, is an eclectic building of neo-Romanesque inspiration dating from 1868, which has special protection due to its historic-artistic value. Interventions in the second half of the 20th century had distorted its essence and coherence as a whole. 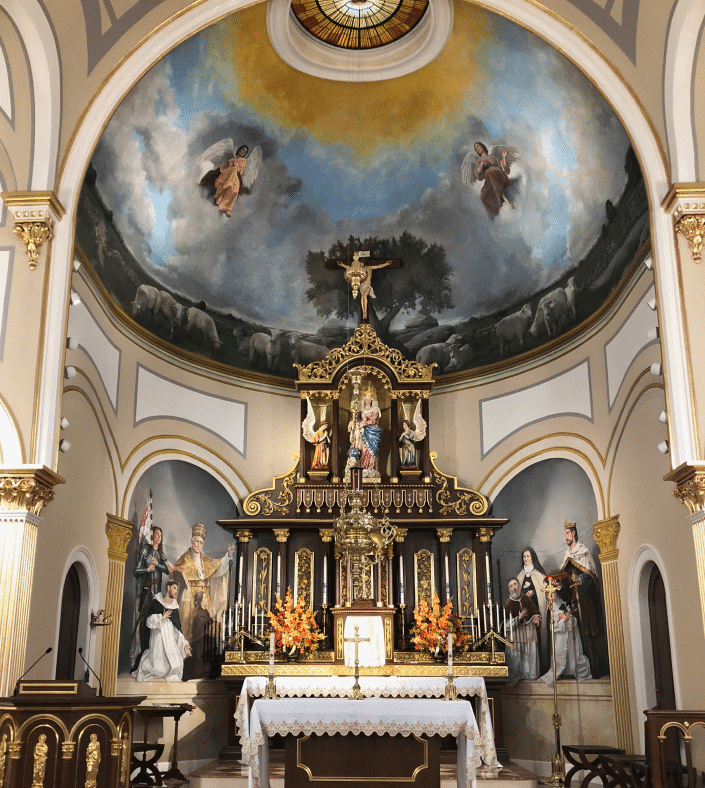 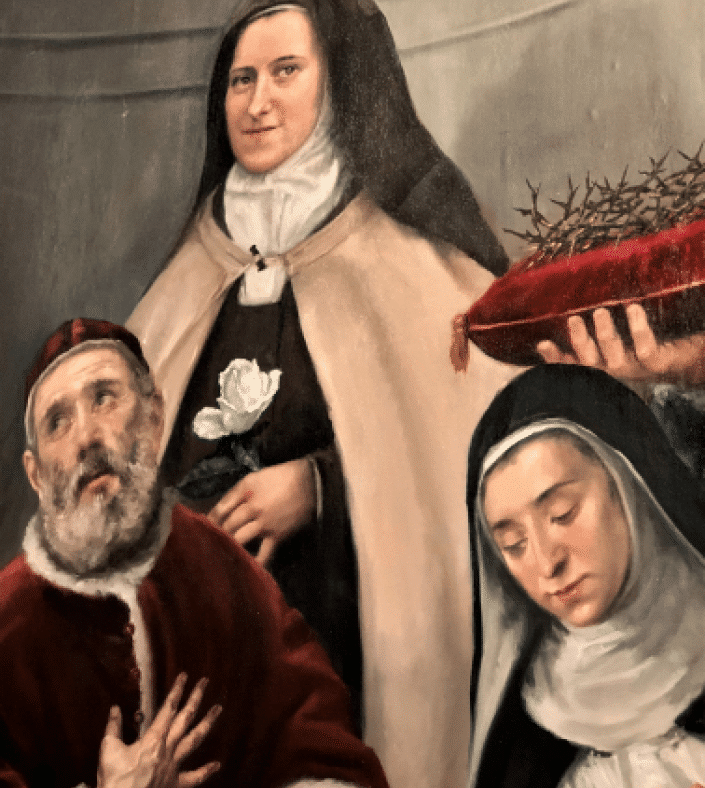 preliminary analysis of the different decorative stages and their current state, the restoration process was undertaken, combined with the renovation of elements in order to harmonise the artistic ensemble. The main altarpiece, which had been repainted, was dismantled, cleaned and treated. Its woodwork was reinforced and the missing elements were reintegrated.

Both this altarpiece and the side altarpieces were given a chromatically harmonising finish and treated with a special protective layer that allows the wood to breathe. The repainting on the historical sculptures was removed and the colours were reintegrated. The dirt was also removed from the canvases of the Stations of the Cross and the icon of the Virgin of Perpetual Help. 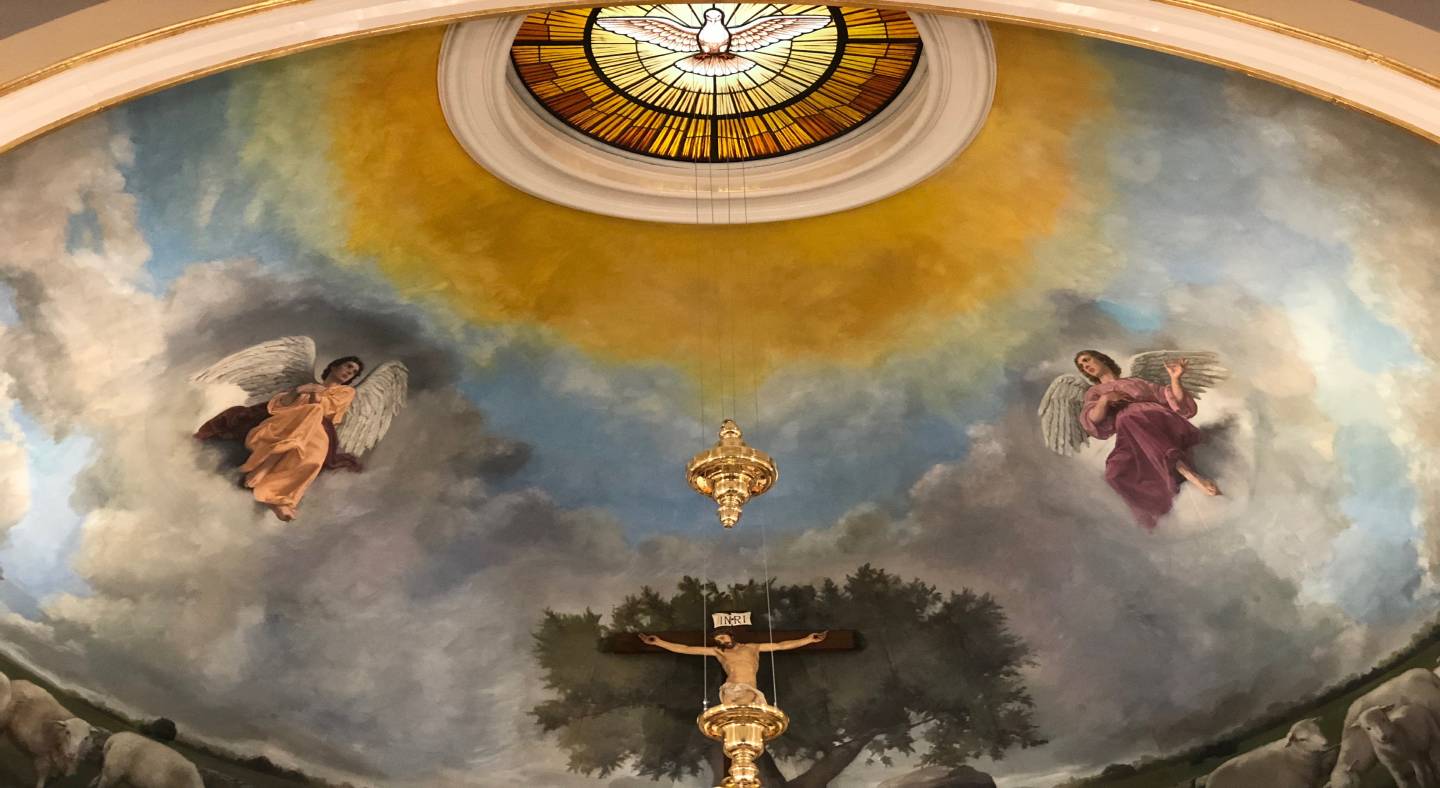 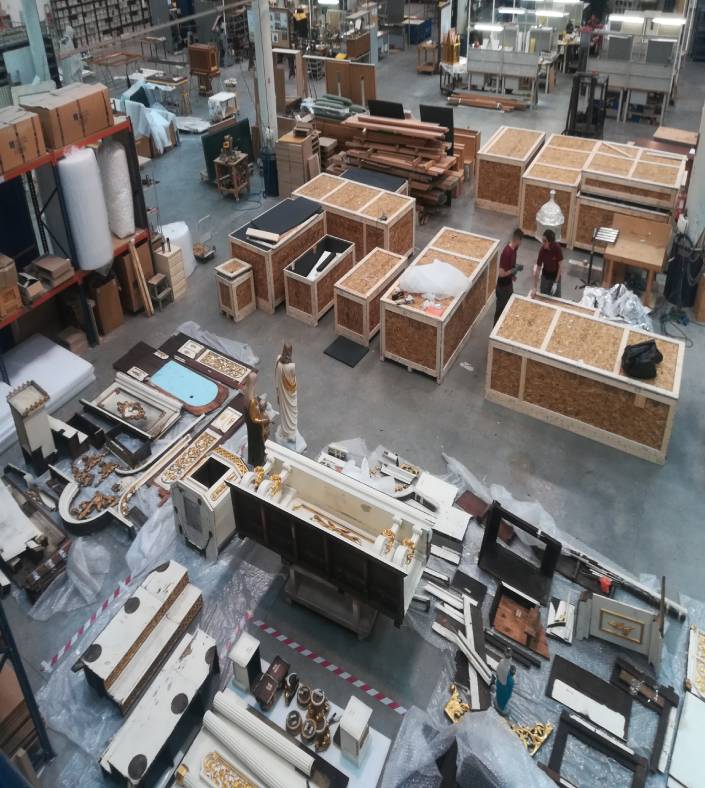 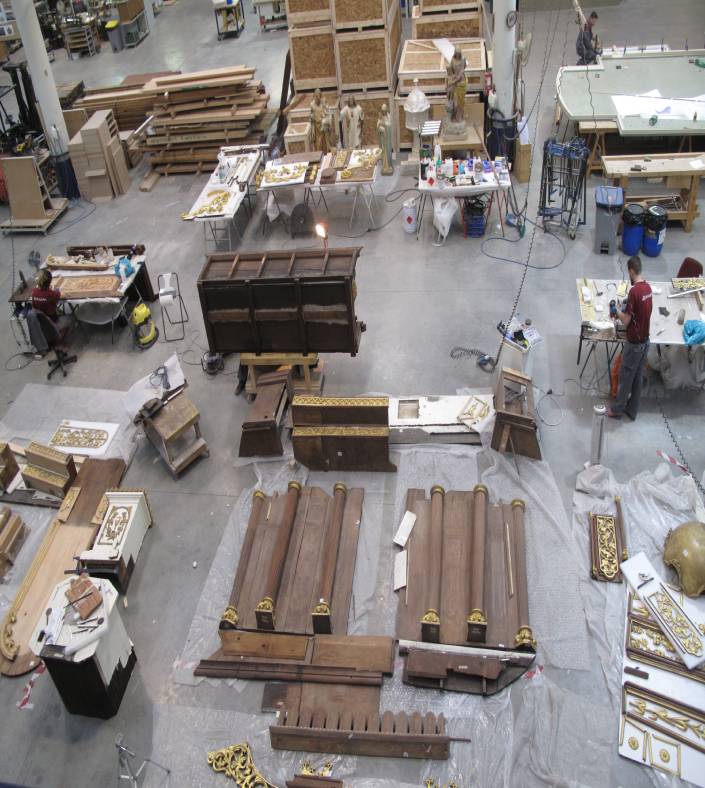 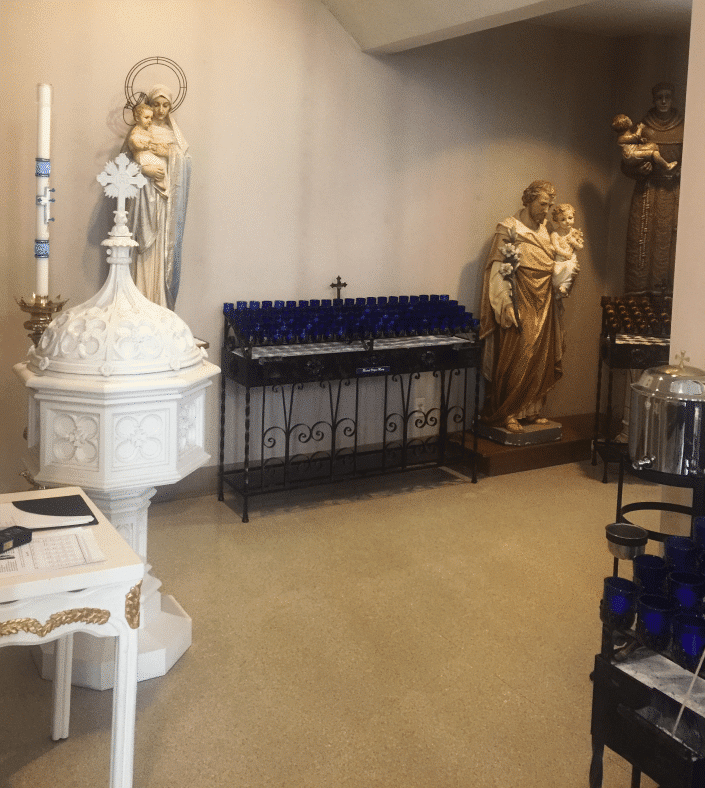 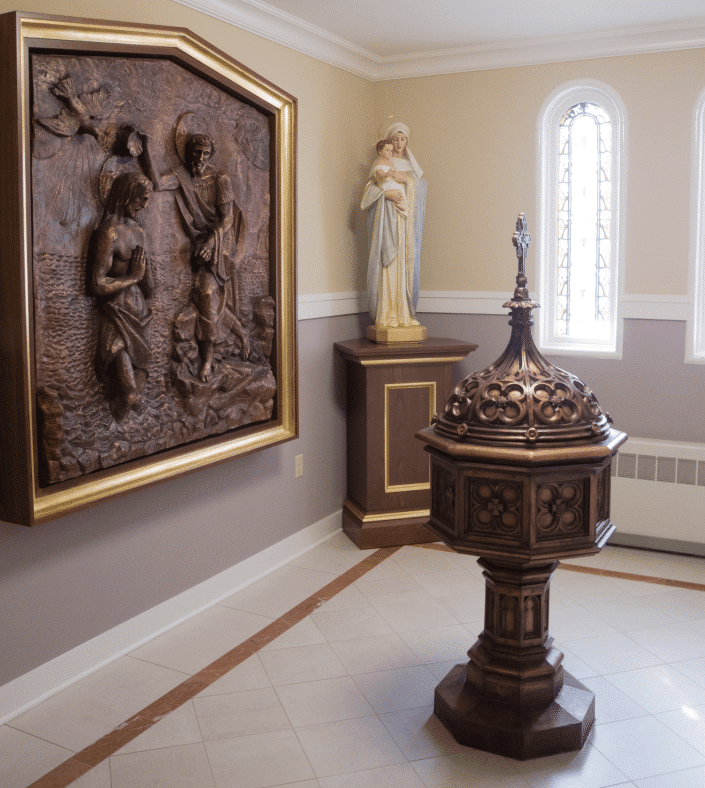 had a neo-Gothic cast iron baptismal font that had been repainted. We have recovered this element, performing the necessary material reintegration, applying a finish in line with the environment.

The space where it is located has been decorated with a relief representing the Baptism in the Jordan, finished in bronze with a gold frame. 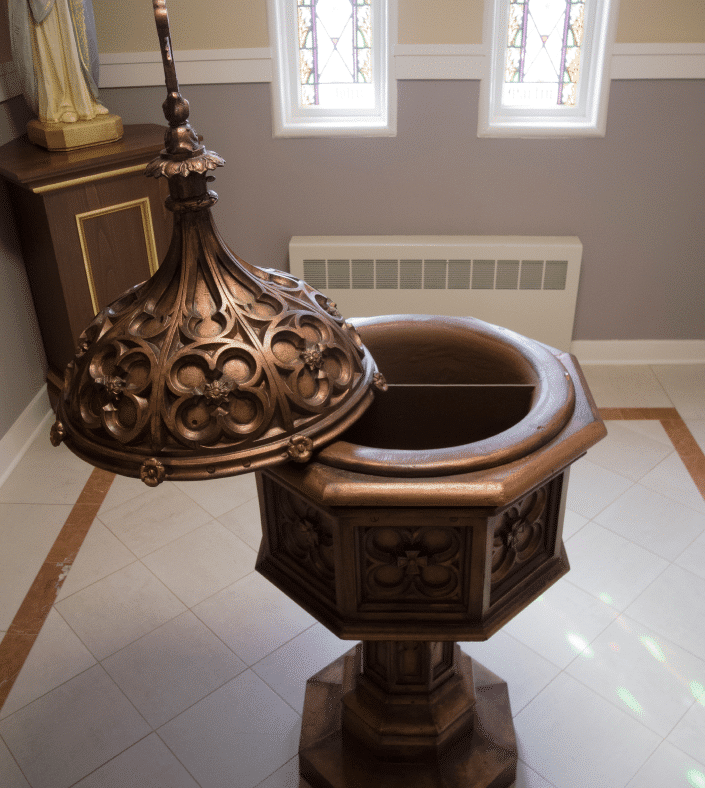 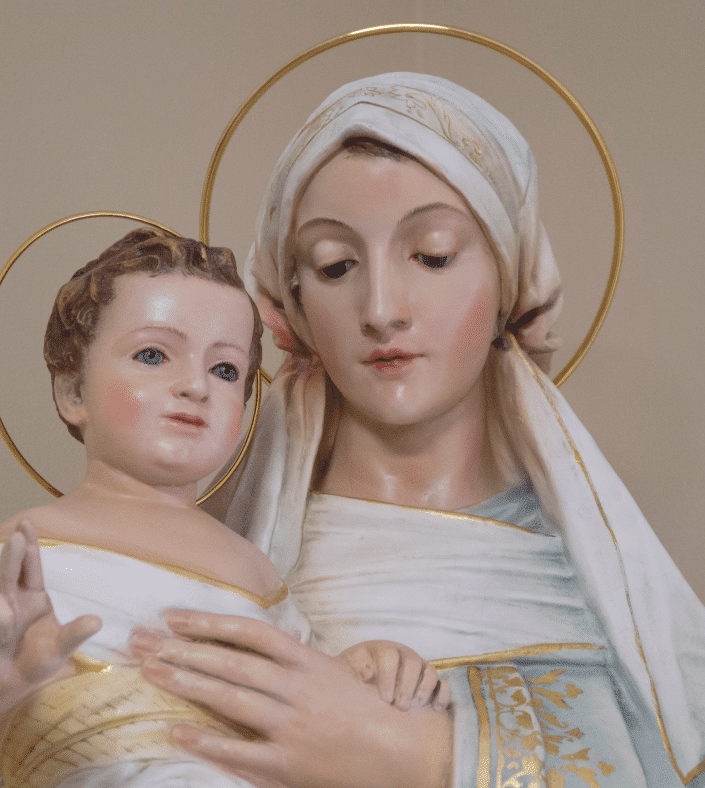 chapels were enabled to install two confessionals. They have great ornamental sobriety and are designed to offer a spacious, welcoming, and private space for confession, which is why they are soundproof. They are made of wood, with discreet metal elements and moldings.

was entirely renovated with a design that allows to celebrate Mass both through the ordinary and extraordinary rites. A new platform was made using marble in two colors. Furthermore, we recovered the missing communion rail and pulpit. We made a light portable altar, for celebrations facing the people, for it to be easily moved to the sacristy. The new sees are inspired by those seen in an old photograph of the church, which follow Pugin’s neo-Gothic designs. We also finished off the main altarpiece with a crucifix, as the photographs showed that it used to have one, and we covered the interior of the tabernacle.

revealed that none of the historic wall paintings could be recovered, so we prepared a new proposal. In the lower part of the wall of the chancel, we contemplated an iconographic program linked to the image of the Virgin of Victory venerated in the parish, inspired by the iconography inherent to its origin as a parish of Francophone emigrants. On the side of the Gospel, the program represents Saint Bernadette Soubirous before the Virgin, Saint Dominic de Guzmán, Saint Joan of Arc and Pope Pius IX, a great defender of the dogma of the Immaculate Conception and founder of the Diocese of Rochester. On the side of the Epistle, the program represents Saint Pius V, creator of the invocation of Our Lady of Victory, Saint Catherine of Siena, Saint Teresa of Lisieux and Saint Louis, King of France. In the apse, a flock in a realistic landscape grazes around the Tree of Life, symbolically located behind the crucifix that tops the altar. GRANDA opted for the painter Carlos Ygoa to carry it out, and the paintings were on canvas.

were restored to their original color scheme. On the side of the Epistle, we installed a new altarpiece with a simpler decoration, though the motifs exactly reproduce the historical design of the one formerly dedicated to Saint Joseph, that is, the oldest of the lateral altarpieces. To do so, the motifs were 3D scanned and later carved by hand. The altarpiece consists of a plinth and a structure of three sections, finished off in a semicircular arch. For this altarpiece, we also made a new carving of Saint Anthony of Padua.

has neo-Gothic stained-glass windows dating from approximately 1868. Nevertheless, the window above the vault of the chancel had to be replaced. As a result, we made a 170 cm stained-glass window in the shape of a tondo, where the Holy Spirit is represented surrounded by gusts. The process was carried out using traditional techniques, in golden colored glass, which was subsequently painted and covered in led by hand.

At Granda we seek to encourage devotion. Personalizing each piece and giving unity to all the elements helps to inculturation, to transmit the message and to move the devotion of the faithful.

If you are interested in restoring a piece, creating new ones or carrying out an integral project, fill in the form indicating your preferences and we will call you within 48 hours.


Serving the Church since 1891